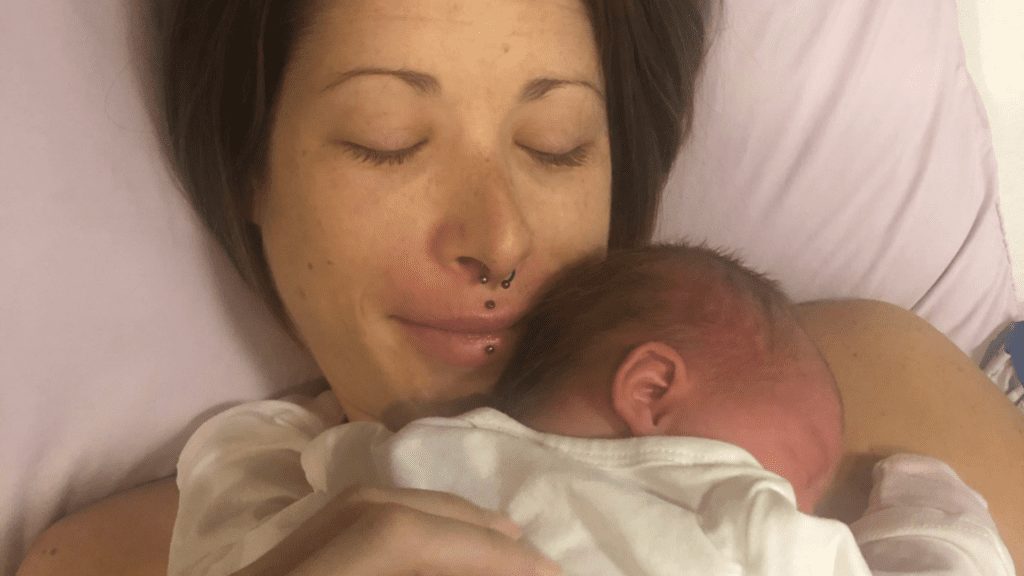 When Mild Poly Gets Complicated

Tiffany’s story is all about her experience with mild polyhydramnios and high fasting blood sugars. She experienced a planned c-section, a possible placental abruption, and a scary postpartum hemorrhage. But even with all of the complications, in the end, she came home with a healthy baby. Now she wants to encourage other mamas to try not to stress so much about their poly.

I did not know of such a condition as to having too much fluid around the baby until I went to my doctor for having contractions on August 19th. They checked my cervix to make sure I wasn’t dilating, which it was closed so that was a good thing. Then my appointments moved to every week to monitor the fluid around my baby girl, and it stayed between 25-30 cm.

I was miserable, couldn’t sleep well at night, and had horrible acid reflux. Then on one of my appointments, they checked my fasting sugar levels and it came out to be 95… and my doctor didn’t like that. He started me on sugar medicine called Metformin and I had to start taking my blood by finger prick to check my sugar levels four times a day; fasting, 1 hour after breakfast, 1 hour after lunch, and 1 hour after dinner. He said that the further along I got it could get worse, even though I pass the GD 1 hour test.

Every appointment I went to, I would tell him how miserable I am and he would explain to me with all the fluid around her puts a lot on my body. My due date was October 24th, he moved it to October 19th, and then moved it to October 14th… then said he can do the c-section on October 12th if the hospital wasn’t booked for that day. On my last appointment of October 8th, they checked the fluid around her and did measurements of her. Her head was measuring big and she was weighing around 7lbs maybe 8 lbs, my doctor did say to let him check my ultrasounds to see if any of them showed an earlier due date and if it did then he would call the hospital to move the c-section to that day.

I was having abdomen pain more, but not contractions just sharp stabs of pain… and my doctor was worried about my placenta breaking away from the uterus which can cause a whole world of trouble if that happens. So he got the date moved to that day to have my baby girl. After I left my doctor’s office I drove to the hospital and called my mom on the way to grab our bags because it was happening that day.

I was a bit nervous of the c-section even though I’ve had them before, it had been 5 years. Got me numbed up and the sheet went up, and then my mom was brought in the operating room to be with me. When they finally got her, I could hear the fluid and was just thinking oh wow that’s a lot… and my mom had to pick up her feet so her feet wouldn’t get wet.

Out came my beautiful little girl screaming like no tomorrow; which I called that she was going to be so mad when they pulled her out of me and boy was she ever. She weighed 7 lbs 14 oz and was 19.5 inches long. My mom went with her while they finished with me.

When I went to the recovery room they told me that her sugar level was low and if it didn’t go above 50 after breastfeeding her she would have to go to NICU and I would need to think about also trying formula. I wanted to strictly breastfeed since I did it with her older sister, so she ate and then they checked her sugar level and it went up! Then every time before she fed, they had to check her sugar level and if she passed them three times… they would then recheck after 24 hours.

When we got to our room, they needed to check on me and the incision… well, I started bleeding a lot. I started hemorrhaging. I knew something was off with me and even told my mom I don’t feel right.

My uterus wasn’t going back down, so I was filling up with blood and blood clots… there we so many nurses in my room and doctors working on me because they had to get the bleeding to stop. They had to push on my stomach a lot and hard to push out the blood clots and blood. Had shots in my thighs, buttocks, medicine in the iv, and they even put 10 pills up my butt… but finally, they were able to control the bleeding and slow it down.

I had lost a lot of blood that they were thinking about having to give me a blood transfusion, but my doctor didn’t want to do that with Covid going on… due to not knowing who donated the blood and if they had the virus so it was going to be a last resort. They started to give me an iron transfusion through the iv, and after that, I got up and walked around the halls with my mom by my side.

When we got released, I was told to continue taking iron and not walk around holding my daughter because of losing so much blood. I’m getting better day by day, my stomach is still sore from them pushing on it so much and hard… but I’m completely grateful that I’m alive, and that I knew something was wrong with me.

It was scary, and she was my first poly baby and she’s completely fine.

Thank you for reading my story, and just know that everything will work out just the way it’s meant to be, and try not to stress so much about having poly.

Tiffany Hasn't Shared Any Updates Yet

But we know from keeping up with her through support groups that her sweet little girl was diagnosed with laryngomalacia and had surgery to correct it. We’ll reach out to Tiffany soon for more updates!