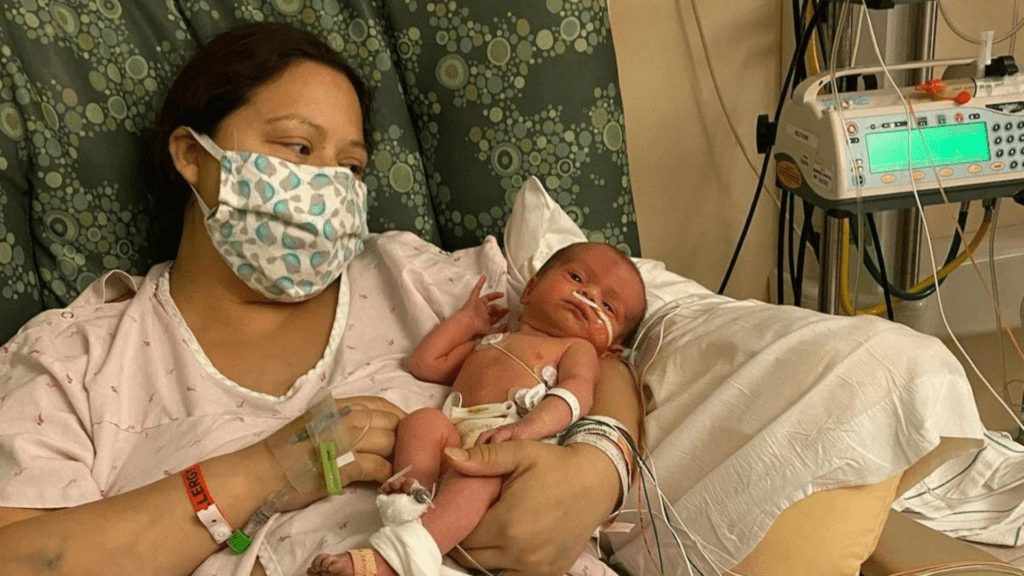 When Relaxed Care is Risky

Jennifer’s story involves a rare set of complications missed by her doctor that led to preterm labor and a vertical incision c-section. Her story is an INCREDIBLE example of how strong poly mamas really are.

Jennifer and I were pregnant with our poly babes at the same time, due within one week of each other. We were connected by a Facebook support group for Polyhydramnios and I distinctly remember her journey, and the day her water broke at only 33 weeks. Her story wrenched my heart just as much then as it does now because so much of it could have happened differently if her doctor had made different choices. I am so humbled that Jennifer shared her story here because this story was one of two that made me want to create this entire website in the first place.

Jennifer experienced premature preterm rupture of membranes, a scary delivery, NICU time, and a re-hospitalization. Her story is labeled as mild polyhydramnios because  that’s where she would fall according to her only AFI measurement. However, she was never given a follow up biophysical profile, so she was very likely in the severe range when her water did break.

I was first diagnosed with polyhydramnios at 29+6 weeks. My doctor said it was mild at 25 AFI. All the info he gave me was I was high risk for preterm labor. Two weeks later I saw him again and he measured my belly and said he thinks my levels went way up but would recheck by ultrasound in another 2 weeks. I was miserable. I’m only 4’11”.

I had excessive swelling in one of my feet and had two ultrasounds to rule out blood clots. I did not have gestational diabetes. From week 32 to 33 I gained 3lbs. As this was my 3rd baby but first poly baby my pregnancy was so much harder. I had SPD from all the extra fluid and pressure. At times I could barely walk. Everything hurt.

I called my doctor often and voiced my concerns. I had Braxton Hicks often. Still, my doctor said there was not much I could do and just deal with it. He never referred me to an MFM. Never explained the possibility of a cord prolapse if my water broke. I requested my level to be checked sooner and he said it was fine to wait until I was scheduled at 35 weeks.

Well… the morning of June 9th I was working from home and I stood up and felt a small gush. As I walked to the bathroom more small gushes. I was only 33+6 weeks. I called my husband first then the doctor. The nurse told me I could shower and pack my stuff. I didn’t shower but I packed up and called my mom (my belly was too big to drive, lol). Got to doctor and big ol gush in the parking lot… so so much water. Got checked in and doctor saw me. Verified my water did indeed break. Then he told me that hospital wasn’t able to deliver before 35 weeks and didn’t have a NICU. So I had to go to a different hospital and now see the high-risk doctors I heard about on the Facebook groups. I ended up going into full-blown labor.

About 16 pain-med-free hours later they were able to stop my contractions. I had so much fluid that I had big gushes every 30 minutes or so. The next day when I was 34 weeks I was told they would do my c-section that day. I had so many questions. Would my baby be okay? How does the NICU work? Could I see him and hold him? Well about mid-day I met with the high-risk doctors. I also had an anterior placenta so they wanted to check placement. During the ultrasound, they discovered I also had placenta accreta (where the placenta grows into the uterine wall). It was all very risky and they said a hysterectomy was most likely.

Fast forward a few hours and lots of tears later. During surgery, they had to take my entire uterus out via vertical incision due to placenta placement. My baby was then cut out of the backside of my uterus. They said I still had a liter or more of fluid in my uterus still! No hysterectomy needed!

Then on June 10th, my baby boy was born. His due date was July 22nd. He was 5 lbs 12 oz and 19.75 inches. He wore a CPAP for less than 12 hours. He was doing amazing in the NICU. Next, his body learned to regulate his temp. The feeding was his next obstacle.

After 13 days in the NICU, he was ready to come home.

During his NICU stay, I developed an infection and fluid build-up in my incision. Was back in the hospital and unable to visit him for about 5 days. We were discharged home the same day. I ended up having my incision reopened and I wore a wound vac for two months. I also was just diagnosed with diastasis recti they said was due to my poly and getting so large.

My baby boy is now 4 months old and doing amazing! He is healthy and happy and for a preemie, he is bigger than my other full-term babies were!

For other poly moms… please don’t hesitate on any questions or concerns you have. Voice them to the doctor. If he isn’t willing to listen or not giving the answer you seek check on a second opinion. I wish I would have. I have no idea how bad my poly got since my doctor was in no hurry to recheck it. I had no idea a cord prolapse was a possibility until way after I had my baby. There’s so much I didn’t know.

I hope my story doesn’t scare anyone as I believe mine is a pretty rare case.

I still struggle with all the what-ifs with how my poly was handled. I still have lots of questions and I’ve addressed some with my OB who pretty much shrugged them off. I still get mad that I was never warned about a possible cord prolapse if my water broke… which it did. Thankfully my cord did not prolapse. Sometimes you have to watch your own back and don’t be afraid to stand up for yourself.

My preemie baby boy is doing very well. he is talking and walking. Behind on zero milestones. No problems have arisen at all so far that could have caused my poly. He had ear tubes put in recently and a lip tie revision. Other than that he is a normal toddler!

My diastasis recti was a misdiagnosis and I actually have a large abdominal hernia they said that was caused by my belly getting too large and stretched out… likely to with poly I am told. I will soon have to undergo another surgery to have that repaired.